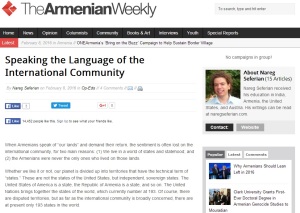 Speaking the Language of the International Community

When Armenians speak of “our lands” and demand their return, the sentiment is often lost on the international community, for two main reasons: (1) We live in a world of states and statehood; and (2) the Armenians were never the only ones who lived on those lands.

Whether we like it or not, our planet is divided up into territories that have the technical term of “states.” These are not the states of the United States, but independent, sovereign states. The United States of America is a state, the Republic of Armenia is a state, and so on. The United Nations brings together the states of the world, which currently number at 193. Of course, there are disputed territories, but as far as the international community is broadly concerned, there are at present only 193 states in the world.