All right, so I am cheating with this first one. The truth is, I was seeking out that random flyer in Persian which I had seen the other day, but it had already been removed from where I had seen it. Suspicious. This particular flyer is advertising official translation services, which is less of an indication of a growing Farsi-speaking community in Yerevan. But still, it does imply something. The light pole on which the flyer is stuck is also advertising trips to the Georgian Black Sea coast, tatoo services, an opposition rally, and a random message by an extremist group, which, I suspect, removed that Persian flyer which I was seeking earlier. The reason for that suspicion will become clear. There is also a rag.

My favourite items of observation in Yerevan are the random things – ankap baner, as some say. There are a lot of striking contrasts in that context. Take this particular shot, near an HSBC atm. There is HSBC in Armenia, which means some sort of relationship with the wider world, some sort of recognition of our economy and financial sector, some indication that people in Armenia are open to broader vistas, at the very least. Right next to the HSBC sign are flyers by that extremist group which insists that a certain opposition figure is evil and, by the way, so are Jehovah’s Witnesses. I love contrasts like these.

A few steps away from that taxi stand, one can witness progress in progress from an old street in Yerevan which, like many of its kind, has become unrecognisable in the past decade, for better or for worse. In the foreground is the only khachkar workshop that I know of in the city. I imagine there are other studios and such-like, but I thought the contrast between the high-rise, modern concrete building and the modest, ancient artform would make for an interesting picture. 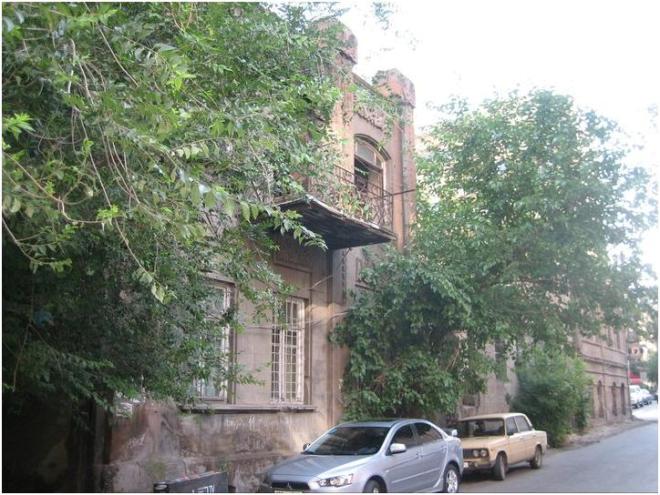 Here’s one of those “newer old” building, perhaps from Tsarist times, but more probably early Soviet. I love the Soviet-era buildings from the 1920s up to the Second World War. It seems like more effort and thought were put into them. Definitely more effort, given the state of technical affairs at the time. Buildings from that time period at least appear like they were more comfortable. On the other hand, they were probably meant for the elite, while most people lived in squalor under Stalin’s rule. Right at the edge of this street, however, is an even older, maybe even pre-Tsarist, Persian-era building, made of brick. Brick! It is such a rarity to find brick in this city. I only just realised that the reason I enjoy the old buildings in Tiflis is mainly because they are made of brick, which reminds me of my native Delhi, both cities having been obviously influenced by Persian rule. The buildings and, indeed, the block in this picture probably won’t last another ten years. 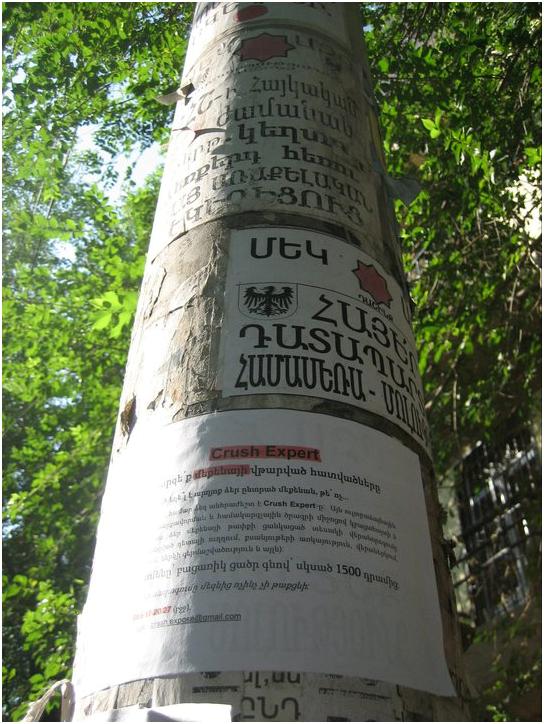 More homophobic propaganda by that extremist group, accompanied by someone who, at first glance, can apparently help you find romance in your life. Sadly, the “Crush Expert” is really guaranteeing checking up on an automobile you wish to purchase. As the e-mail address indicates, he or she is really a “crash expert”. Apparently, there is some kind of technology or ability to carefully examines cars on sale to check whether the parts are original, things like that, to make sure one is not being ripped off on a used car deal. 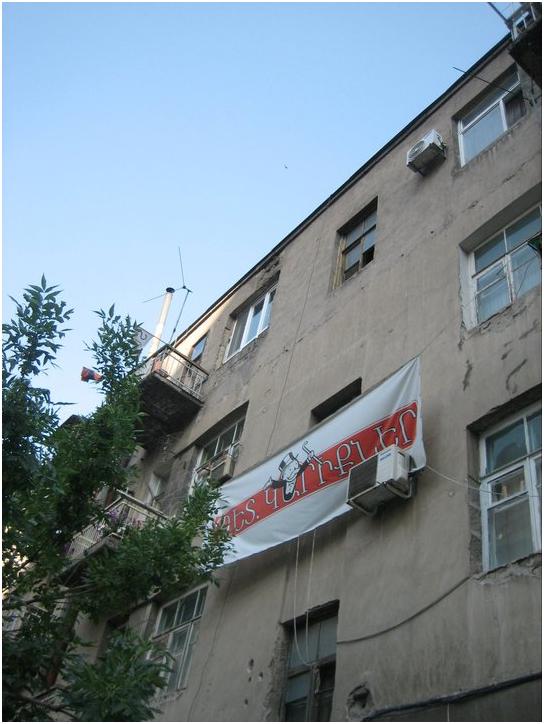 This sign has been up for at least a couple of years. It reads “State Needs”, and is a cynical take by residents of an old building surrounded by new properties, residents who do not wish their homes to be expropriated by the government, as happened with their erstwhile neighbours. The design speaks for itself. The “Monopoly” board game was actually quite popular in Armenia in the early ’90s, in the mout ou tsourd dariner, the era when lack of electricity, water, or gas meant hours at home, where time could be spent together forging deals for Boardwalk or taking a ride on the Reading Railroad. 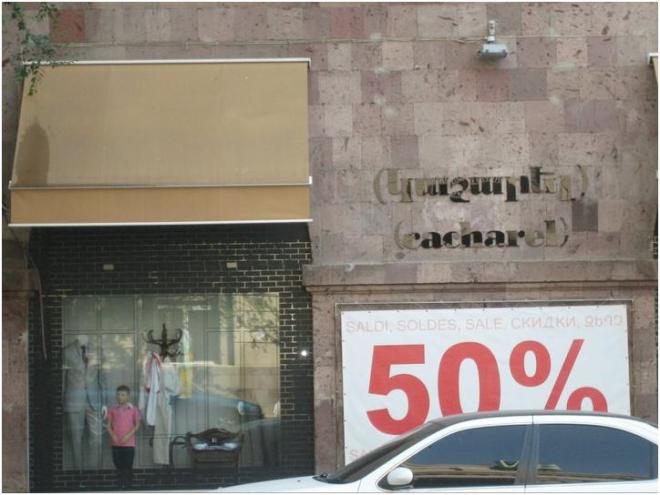 I’ve always wondered why this brand did not opt to modify its name in any distinct manner in this country, as the word “kasharel”, with very little change from the way it is written in the Armenian, simply means “to bribe”. I guess they were appealing to a certain swathe of Yerevan society. 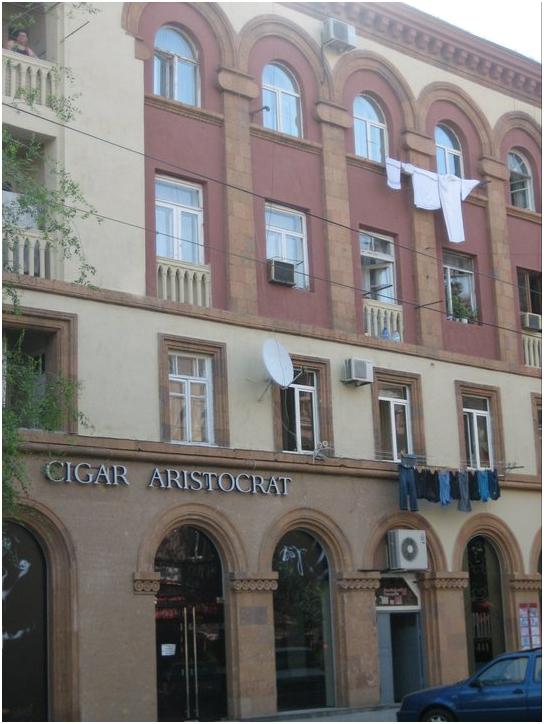 I love this shot. A store giving itself such a noble name in downtown Yerevan finds itself sharing space with the laundry of a couple of its neighbours! The satellite dish and the air conditioners afford additional aristocratic touches. It is very precious. I wonder why dryers and dishwashers are not more popular in the world. Are they simply too expensive, too much energy and water requirements? I also love the arches that were prominent in early Soviet Armenian architecture; it doesn’t seem like many of the new buildings have adopted that, to my mind, very Armenian motif. 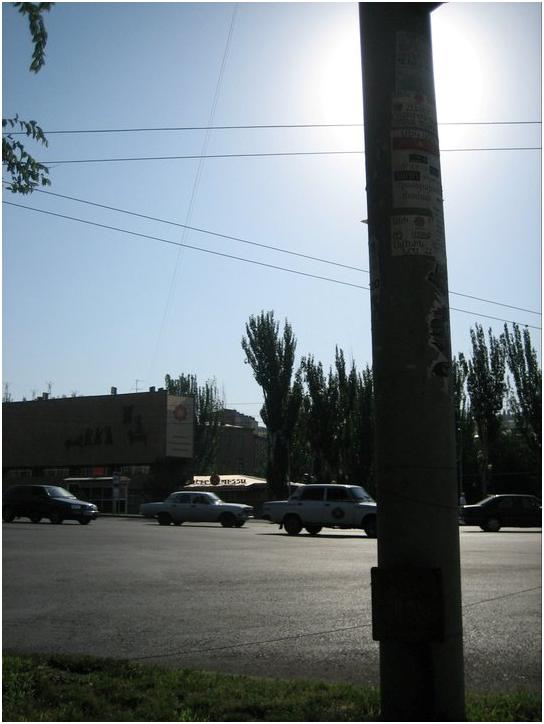 So, more extremist propaganda flyers. They really are all over the place, and they seem to be new, that is, they get replaced or refreshed. Whatever this group is, they work actively. I happened to discuss them just today with two people who also happened to notice their ubiquity. Does anybody have details on them? I do not know if they are immediately under any political party or figure. It did occur to me, though, while looking at the Shakhmati Toun, as can be seen in this picture, that whatever the foundation is that is based in that building has a similar eight-pointed star as its logo, in addition to that wheel of eternity in the centre. This extremist flyers group has that eight-pointed star, which is not really something I recognise either as being particularly Armenian or pertaining to any extremist Armenian cause or movement or group. Could anyone enlighten? 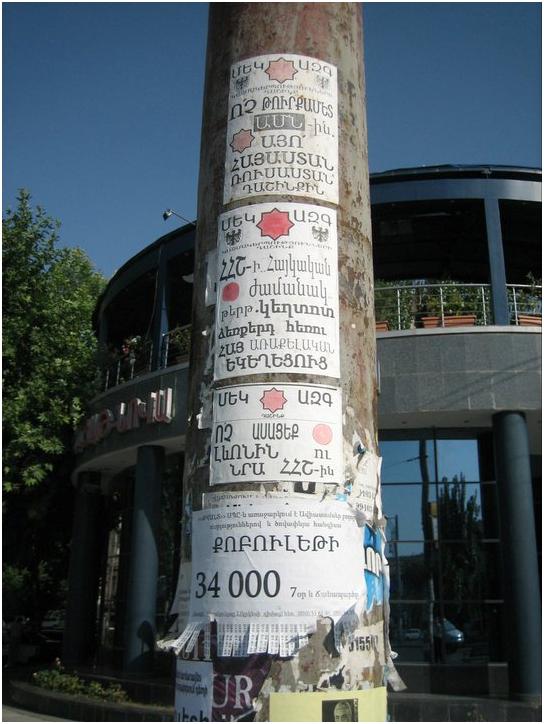 It also became clear by this set of flyers that, inasmuch as the members of this group are clearly against a certain political movement, they are also declaring, “No to the Pro-Turkish United States! Yes to the Armenia-Russia Alliance!”. I don’t know what kind of extremist group would insist on propagating neo-colonialism. Oh, and by the way, 34,000 drams will get you a week in Kobuleti.

The first in a series of graffiti from the relatively new underground passageways near the universities. It pains me to see how quickly those underground passageways were ruined. I guess we have more than just a strain of barbarism among the people in Yerevan. Decorating them with pretty pictures might be a solution, though, as is the case in that little-used underground path to the Hanrabedoutyan Hrabarag metro. This one pictured, though, seems to be an ancient Roman asking where our Emperor Tigran the Great is in Italian. Or is it an ancient Armenian soldier, awaiting the arising of a powerful leader of our people… in Italian? And why are the punctuations so messed up? Or is it an Armenian asking, “Who is that Tigran? Is he Great, anyway” – “Ed ov e, Tigran? Grand e?”. All right, so I’m pushing it with that last one. You gotta love the accompanying graffiti, which reminds all Armenians that THAT is our map in real terms (Shahoumyan notwithstanding), and that those territories are LIBERATED, and not occupied. If graffiti will get us Artsakh, then I would like to commission some other works, please.

This is the cutest thing – pro-Linux, pro-free source software graffiti in Yerevan, where most any pirated digital product can be found. Does anyone remember what those bar code-like square things are called? I keep forgetting the technical term for them. Also, can anyone “read” it, have access to whatever it links to, through this picture?

I absolutely love this. A colourful Einstein, accompanied by the caption, “Relativity is incomparably relative”. Ah, but the wordplay is lost in the English – “Hamemadaganoutiune anhamemad hamemadagan e”, “Relativity is ‘not relatively’/’absolutely’ relative”.

I don’t know if that is supposed to be House from the TV show and I’m not sure if the accompanying English text has anything to do with that character. Any interpretations?

The ONLY hot dog stand in Yerevan! Okay, so maybe not the only, only one. As far as I know, though, this is the closest it comes to having a hot dog cart in this city. I used to stop by here back in my Yerevan student days. Artyom was kind enough to let me take a picture of him with his wares. He did ask me why I wanted the picture, though. Well, this kind of thing is rare in Armenia, I said, but it’s commonplace, as it were, in a place like New York. Pretty stereotypical there, actually. “If you take my picture, then, will you take me to New York?”. Always the entrepreneurial spirit!

I forewent the sauerkraut and mustard, so it ended up being two sausages, with mounds of salt and pepper, cucumber and tomatoes, ketchup and mayonnaise. All for less than a dollar. Not exactly a New York hot dog, I know, but yummy all the same.