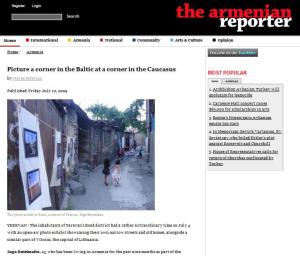 YEREVAN – The inhabitants of Yerevan’s Kond district had a rather extraordinary time on July 4 with an open-air photo exhibit showcasing their own narrow streets and old homes, alongside a similar part of Vilnius, the capital of Lithuania.

Inga Butrimaite, 23, who has been living in Armenia for the past nine months as part of the European Volunteer Service program, was quite struck with Kond, which is a unique part of the capital. More than the streets winding uphill and down between people’s homes and yards – a far cry from the wide, bustling avenues a few minutes’ walk away – it was the people she found most welcoming.

“Once I was passing by and was attracted by stone houses standing just next to the center and the people who seem to live half of their life in their yards,” Inga recalls, “I love to watch daily life, and it is so open in such a district. Often their doors are open, people are talking and doing their daily chores in shared yards or in a street next to their home. As soon as I found this district, I found Yerevan much more attractive and beautiful.”

And then she thought of Užupis, a part of Vilnius in her native Lithuania. Užupis, too, lies in the center of the city, and it, too, was a rundown, neglected place. Until recently, that is.

With the activism of local artists, Užupis was not only transformed into a giant, colorful canvas attracting tourists as well as locals, but it also declared itself an independent republic, boasting a constitution, laws, a national anthem, even embassies abroad. It is, of course, a lighthearted phenomenon, but also a reflection of what can be achieved with people acting together and taking matters into their own hands.

And matters took quite an interesting turn in a little open space in Kond on Saturday, the Fourth of July. No, independence was not declared – even with as auspicious a date as that – but, with the backing of the Civil Society Institute, a local human rights NGO, around 50 photographs, stapled in pairs on canvas sheets and hanging on clotheslines, put Kond and Užupis side-by-side, much to the delight of those present.

Especially the children. Some 20-odd boys and girls ranging in age from just past toddling to early teens constantly surrounded the organizers and bombarded them with questions about Lithuania, and what Inga and other European volunteers and guests were doing in Kond, of all places. A movie showing followed, which, unfortunately, was cut short due to rain.

“I am eighty years old, and have lived here all my life, in that house right there,” a certain papikVaroujan said proudly, pointing, “and never in all this time has there been anything like this.” His eyes were visibly shining with excitement and curiosity through thick glasses.

Vahagn Vardumyan, a local activist, helped put together the event. He is quite certain that this part of Yerevan is going to have the same fate as the old buildings that were demolished to make way for the modern Northern Avenue. “But it’s events like this,” he says, “that will make people appreciate their neighborhood, maybe even work to make it better, to enjoy living here and not let anybody destroy it.”

Inga agrees, “I think the district has a value as a whole – not particular buildings. Besides, such a kind of community place has a great potential to be attractive for Yerevan’s visitors.”

“Locals seem to be proud to be kondetsi, and it is also true that some are tired of the social conditions, such as having to carry water every day,” Inga observes, adding, “Appreciation of this place can become a great power to stimulate the inhabitants of this cute district to give it a second life. At least we have the similar district Užupis in Vilnius as a very visual example of that kind of revival.”