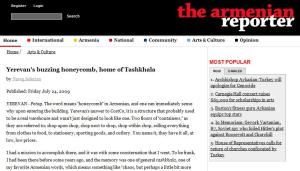 YEREVAN – Petag. The word means “honeycomb” in Armenian, and one can immediately sense why upon entering the building. Yerevan’s answer to CostCo, it is a structure that probably used to be a real warehouse and wasn’t just designed to look like one. Two floors of “containers,” as they are referred to; shop upon shop, shop next to shop, shop within shop, selling everything from clothes to food, to stationery, sporting goods, and cutlery. You name it, they have it all, at low, low prices.

I had a mission to accomplish there, and it was with some consternation that I went. To be frank, I had been there before some years ago, and the memory was one of general tashkhala, one of my favorite Armenian words, which means something like “chaos, but perhaps a little bit more organized.” Having grown up in New Delhi, however, I am used to making my way through hordes of people and sniffing various smells and odors in the process. But that doesn’t mean that I find it pleasant, necessarily, just an unavoidable aspect of the miniature adventure.

There are no shopping carts, just a few helpful signs, but more than a few helpful people. What was remarkable about Petag was how it turned out to be a microcosm of Yerevan, which is itself a microcosm of the Armenian experience, in the sense that everybody knows everybody else. I am specifically referring to how I ran into people I knew, which I wouldn’t have otherwise expected: the Brazilian friends, for example, who are in town, who don’t even speak the language, who aren’t even Armenian to begin with. Fortunately, they had an interpreter. What were they doing there, of all places? “Shopping.” Of course, why else would anyone make his way to Petag? Why was I so surprised?

And then I ran into an old acquaintance from my Yerevan State University days. Barev, barev. Inch es anum, what are you up to? Kharuh. Another gem of a word from the Hayastan lexicon. It means “mixed,” I suppose, but it conveys a broader sense of “various and sundry,” “this and that,” “I’m not sure myself, and don’t even ask me to explain it to you.” Beautiful, succinct, laconic, to the point, saying everything by saying nothing.

Finally, in my search I venture into a shop that doesn’t have what I’m looking for, but the shopkeeper insists that we know each other. Turns out we have met, although I apologize for not having remembered. My name is Nareg, by the way. “Ah, Nareg, what a lovely name.” I am rather proud to bear it myself. He doesn’t reciprocate with his own, but it doesn’t matter, it’s all the same. I’m sure our paths will cross again sometime, either in Petag, or elsewhere in the Armenian world.